Home / Stereoscopy News / Everything You Need To Know About Parallel Viewing

Everything You Need To Know About Parallel Viewing

Have you ever thought about how your sense of vision works? What is that happens in the brain that makes the eyes see what they see? How do our eyes communicate to the brain the depth of space? Why is it that we can recognize the difference between two-dimensional and three-dimensional objects?

The vision has been the theme of many research conducts in different periods of history as well as in the current psychology, neuro physics, anatomy. It hasn’t been a foreign topic to the more creative workers of the society, such as are the artists. You are probably familiar with the artistic movement Opt Art. This 19th century movement drew in the artists who tested the human vision and played with with ways people perceive simple abstract object, such as lines, squares, dots assembling them together in different ways in order to “trick” the eyes into seeing 2D objects in 3D (optical illusion).

Though the process and ability of our body to “convert” the light into images is fascinating beyond imagination, understanding how our vision works is not that difficult, we just need some facts to give some facts and figures to create a logic narrative out of it. 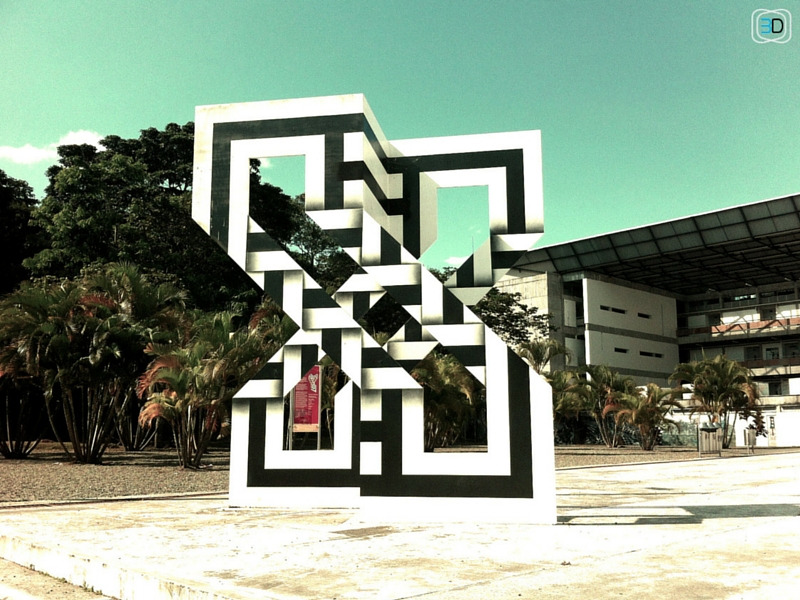 The way our eyes see is just like explaining the functioning of a camera. The way the light passes through a camera regulated just enough to make an image is exactly the process in which the eye captures the light, and thus the image. The eye absorbs light rays through the cornea (the membrane) that represents a front “window” of the eye. The cornea has this amazing power of refraction which breaks and bends light rays in such a way that they pass freely through. Refracted light passes than through the pupil, located in the center of the iris.

Iris is one of the most important elements of this process, as it is the part through which the light actually enters the eye. The eye’s iris works sort of like a shutter in a photographic camera. Depending on how much light enters the eye, iris has the capacity to shrink or enlarge the viewing object (or more objects). When the light passes the iris, it further passes through the crystalline lens of the eye. Not surprisingly, the lens of the eye functions as the lens of a camera. It has a flexible structure which enables it to shorten or lengthen its own width focusing the rays properly which helps the retina to get a sharp image.

The retina is very much like a film in a camera, it captures all the rays and processes them into impulses through tiny nerve endings. It, then sends the impulses to the optic nerve in our brain. 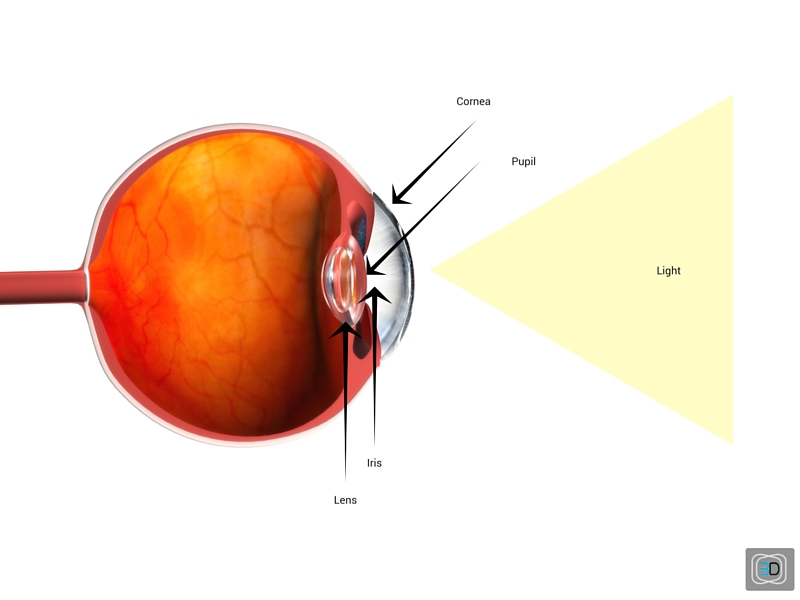 When the focused light reaches the retina of the eye what it does is that it provokes a complex chemical reaction in the light-sensitive rod and cone cells of the eye. Rods contain a chemical rhodopsin, also called the “visual purple,” while cones contain chemicals referred to as color pigments. These chemicals go through a change that leads to the process in which electrical impulses are sent to the brain through the optic nerve we had mentioned earlier.

The electrical impulses arrive than to the visual cortex of the brain. From here, the brain analyzes both the color and the light information received from the rods and the cones, interpreting them as light. The brain flips the image – because the retina projects the image upside down – and fills in for the blind spot if necessary. It sounds so complicated, but it happens almost instantaneously, allowing you to interpret things as soon as you see them. Sometimes we get the feeling that we reacted to something before we thought about it. This is because some of the information from the retina is sent to the visual reflex system in our brain. This allows us to react quickly to threats. As soon as we see something potentially dangerous coming toward us, our visual reflex system understands it and processes it that fast that it causes us to move or react before we have any time to process it to our conscience.

So, What’s The Deal With Parallel View?

Well, we have talked about the physical and biological process that allow us to see and understand things, but what about the optical aspect of it? Why do we see the world in 3D and how do we do that?

Normally, when we look at the things that surround us, our eyes concentrate on one object in the scene and our eyes focus that same object. This is what our brain is already accustomed to doing. We don’t pay attention to it, but our brains are used to this one-to-one relation (if not communication) between focus and convergence.

To separate the two means that we should decompose the process our brain completes on its own. How do we do this? The gift of a pair of eyes, instead of just one, gives us the capability to see the same scene from two different points of view. You can apprehend this with a simple experiment: close the left eye and hold it for couple of seconds. Try to remember the scene exactly as it is. Than, open the left and close the right eye keeping it shut for a while. You will notice that you are not seeing two identical scenes because the angles are different. Considering we see contemporarily with both eyes, we can not recognize the moment when our brain makes the scene we see look 3D.

Flat surfaces, as well as 2D images we view on all types of screens, books, paintings, photographs, are all good pointers to the activity our sense of vision plays every day. Since the industrial revolution, when the technology pops into societies almost instantaneously, we have reduced our vision from three dimensions to only two dimension images. It was obvious that at some point people will start searching for ways to enter the flat service and make it look more realistic, thus the popularity of 3D in the recent decays. We want our virtual reality to look as if it was for real as well. VR consoles, 3D glasses, 3D cameras, games, movies – they have all become the tickets for entering the worlds of imagination that look as parts of our actual realities.

However, all of these devices are not the only way that you can see the 3D effect. We talked earlier about the power of our brain to create a 3D effect from everything that we see. So, if we have the brain of such an ability and we are gifted with a healthy pair of eyes, we should be able to make up the 3D effect of any type of object without any equipment.

Parallel view is the way to do this. If you master this technique, you will be able to see the 3D effect looking at any 2D image.

How Does Parallel View Work?

Parallel view technique does not require any type of device. It does, however, require two images, that is a pair of images. These are what we call stereo images or stereo photographs. Stereo images consist of two pictures, one for the each eye. It is as if you had placed the camera on the left eye first, snapped, and then had done the same with the right eye. You get two slightly different angles of the same scene. For the parallel view the photographs should be placed in parallel with the eyes. So, the left eye should be looking at the left image and the right eye should be looking at the right image.

Then, it requires a bit of skill, because our eyes and brain is not used to doing the inverted process. Look at a distant object then bring your eyes down to the image trying not to converge or focus on the image. You will see a blurred double image. Very consciously try to bring the double image into one. Now you should focus your eyes on the new image created with your vision without allowing the left and right images to drift apart. What we are doing here is unfastening focus and convergence, and therefore creating the 3D effect with our vision only.
This type of viewing is actually the base for all the 3D inventions we see today. It is a part of stereoscopy technique that is considered the ancestor of movies, photography, and of course, 3D. The fascination for our own vision is endless really and it is used as inspiration in many industries. It inspired our team as well! This is what brought us to development of the software that functions exactly as we would when viewing a stereo pair. It brings two parallel images together, producing the 3D effect. Certainly, it does the whole thing automatically, so you don’t need to practice the parallel view technique. We are talking about 3DWiggle Software that you can try out for free anytime on this very website.
The next time you take your vision for granted, think about everything we said above. The knowledge and conscious thinking about this can seriously help you to grow as a photographer as well.
Are you already familiar with the subject? Tell us what you know in the comment below, we’ll be glad to put it in the post.